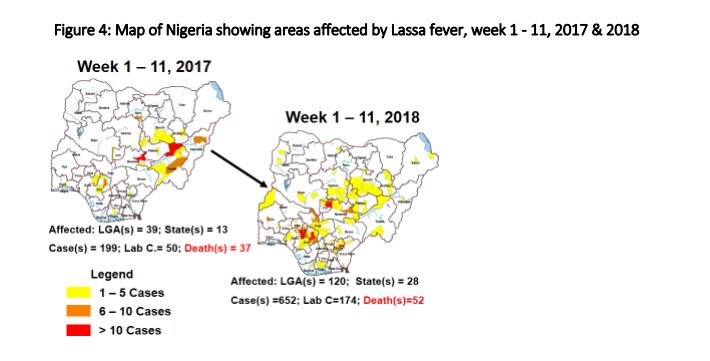 
Every week, the Nigeria Centre for Disease Control (NCDC) shares epidemiological report collated from each Local Government across the 37 States of the Federation.

In the reporting week, week 11 ending on March 18, 2018, we will observe the incidence of priority diseases and note the response activities to prevent further spread.

Analysis on the NCDC website explains the strategic moves informed by data to continuously strengthen the public health system in Nigeria. Here are some important highlights;

There were 164 new cases of Acute Flaccid Paralysis (AFP) reported from 143 LGAs in 34 States & FCT. None was confirmed as Polio.

Polio (poliomyelitis) mainly affects children under 5 years of age, it is a highly infectious disease which invades the nervous system. Nigeria is among the three countries in the world yet to certified as polio-free. Efforts are currently ongoing with the intervention of Bill Gates and Aliko Dangote to make sure Nigeria becomes polio-free.

166 suspected Cerebrospinal Meningitis (CSM) cases with seven laboratory confirmed and 13 deaths were reported from 59 LGAs in 16 States. Katsina has the highest number of cases with 54 cases.

Meningitis is a serious infection of the thin lining that surrounds the brain and spinal cord. The largest burden of meningococcal disease occurs in an area of sub-Saharan Africa known as the meningitis belt, which stretches from Senegal in the west to Ethiopia (Nigeria included).

175 suspected cases of Cholera with 15 laboratory confirmed cases and five deaths were reported from six LGAs in four States. The highest number of case reported in Bauchi (112 cases).

There is an ongoing plans for nationwide Cholera campaign with Federal Ministry of Water Resources and partner agencies. Good environmental sanitation and proper hygiene are important in the prevent an outbreak of cholera.

18 suspected cases of Lassa fever with two laboratory confirmed and one death were reported from ten LGAs in seven States. This makes a total of 1,613 suspected cases, 394 confirmed case and 9 probable cases with 104 deaths since January 2018.

In the reporting week, 605 suspected cases of Measles and two deaths were reported from 36 States.

The nationwide measles immunization campaign has been completed. Immunization is still essential for every child between 9 months- 5 years.