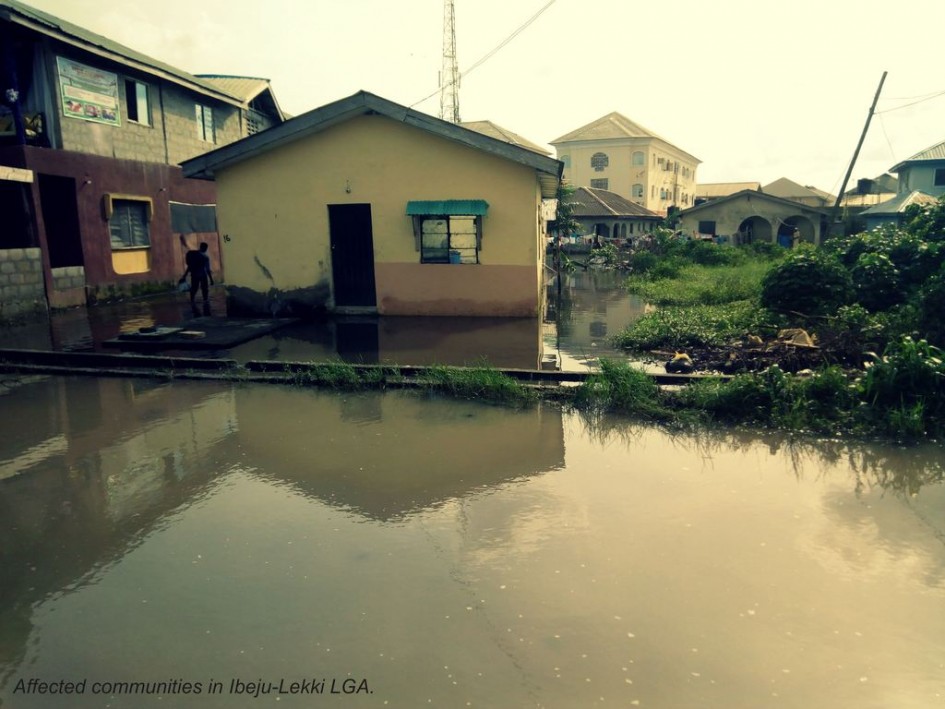 
“A visit to some communities in Ibeju-Lekki and its environs over the weekend gave a clearer picture of the level of devastation and community health disaster caused by the unfortunate incident as many families were seen evacuating water out from their already flooded homes. Careful study revealed that residential areas have been affected by flood as residents construct temporary bridge for easy passage into their homes. The flood has also impacted negatively on the environment and the general public as movement within the community is been restricted thus causing heavy traffic. It has also brought about improper refuse dumping and blockage of drainage and the residents are left with no electricity, sourcing water from wells and rain to cook and wash dishes.

I was glad to note that the Chairperson of my Ward has been in talks with the Local Government Chairman about a lasting solution to problems of refuse disposal in the area.”

–An account from a resident of a flooded area in Ibeju-Lekki LGA.

Flood disasters are not the monopoly of any country, state or local government.

Hydro-meteorological disasters, like floods, are the most common (40 percent) natural disasters worldwide and are widely documented. The public health consequences of flooding are disease outbreaks mostly resulting from the displacement of people into overcrowded camps and cross-contamination of water sources with faecal material and toxic chemicals. Flooding also is usually followed by the proliferation of mosquitoes, resulting in an upsurgence of mosquito-borne diseases such as malaria.

It is often assumed that when a disaster occurs, it is the sole responsibility of local or national governments and other professional response organizations to help victims in affected communities. The safety of health is a joint responsibility, with each person empowering the next with information that can change health outcomes. This connection fosters community resilience.

Community resilience is a broad concept.

For example, psychologists define resilience as a capacity to draw upon personal and social resources to deal with adversity and manage the consequences of disasters. For them, individuals or households are the primary units of analysis.

Sociologists and emergency management scholars, on the other hand, apply resilience to understand how social systems (e.g., organizations and communities as a whole) adapt to extreme events. For social scientists, resilience is more of a collective capacity or collective action taken by all constituent parts of a community.

Sometimes it is not the event itself but the aftermath that harms more lives.

The prolonged health impact of natural disasters on a community may be the consequence of the collapse of health facilities and healthcare systems, the disruption of surveillance and health programmes (immunization and vector control programmes), the limitation or destruction of farming and economic activities (scarcity of food/food insecurity), or the interruption of ongoing treatments and use of unprescribed medications.

Floods can potentially increase the transmission of the following communicable diseases:

The collective action taken by all constituent parts of a community, from members of a family to committee members of a residents’ association, can make the difference in the aftermath of a flood.

Modifying token behaviour is a step in the right direction. Every resident must know the practices and remember key instances to implement them, such as:

Use of Safe Water

If a latrine is unavailable

Resilience is needed if the people of Ibeju-Lekki and other affected areas want to deal with the flood incident using their own capacity and resources. This flood disaster must be perceived as a catalyst for change, growth, and development.