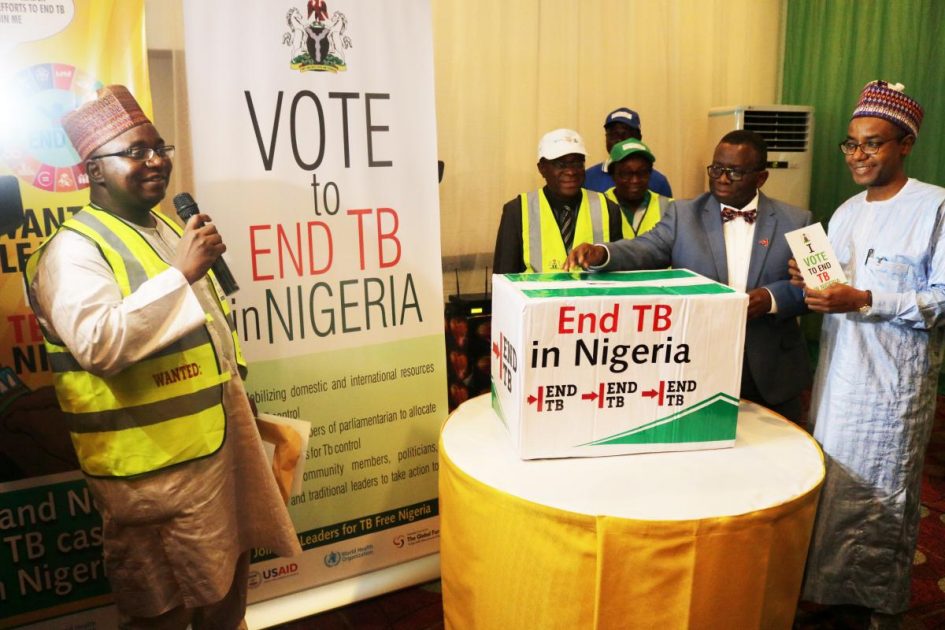 Nigeria government and development partners, including World Health Organization (WHO), are  assiduously fighting the scourge of tuberculosis (TB) in a series of sensitization activities to build momentum towards realization of national slogan “Find and notify all TB cases in Nigeria” to mark 2018 World TB Day.

Nigeria is one of the 14 countries in the world listed as being high burdened for tuberculosis TB. Only 24% of the estimated TB cases existing in the country have been detected.  One of the reasons Nigeria occupies the unenviable 1st position for low detection globally is due to low TB awareness among the general population.

In a Press briefing on 23 March 2018, Honourable Minister of Health Professor Isaac Adewole said “ the major drawback in Nigeria’s TB program is low TB case finding for both adult and children as there are a lot of missing TB cases that were either not diagnosed or diagnosed but not reported “.

According to him, the burden is further compounded by the menace of drug resistance TB and the HIV/AIDS pandemic.

However, Professor Adewole sees light at the end of the tunnel. In his words: “To accelerate TB case finding, the country has now moved from passive to active case-finding in key affected populations, including people living with HIV/AIDS, children, urban slum dwellers, prisoners, migrants, internally displaced persons and facility-based health care workers, to target those most at risk for TB”.

To galvanize support around the 2018 global theme, “Wanted: Leaders for a TB-free world”, Professor Adewole, WHO Country Representative to Nigeria Dr Wondimagegnehu Alemu and other dignitaries casted their votes to end TB in Nigeria.

Dr Wilfred Nkhoma, the WHO Regional Adviser for TB who represented the Director of Global TB programme at the event, congratulated government on achievements recorded so far and pledged the WHO Regional Director for Africa’s commitment and support towards ending TB in the Nigeria.

The highlight of the 2018 commemoration was the investiture of Her Excellency, wife of the President of Nigeria, Hajiya Aisha Buhari as Tuberculosis Champion at the Presidential Villa, Abuja on 22 March 2018.

States across Nigeria have also been conducting week-long activities   to culminate into World TB Day on 24 March aimed at creating awareness and mobilizing support towards ending the deadly disease.

WHO is currently providing technical support to government at all levels and is monitoring progress towards ending the TB epidemic by 2030 as called for in the Sustainable Development Goals and End TB Strategy.