#Meningitis: The Value of A Collaborative Outbreak Response 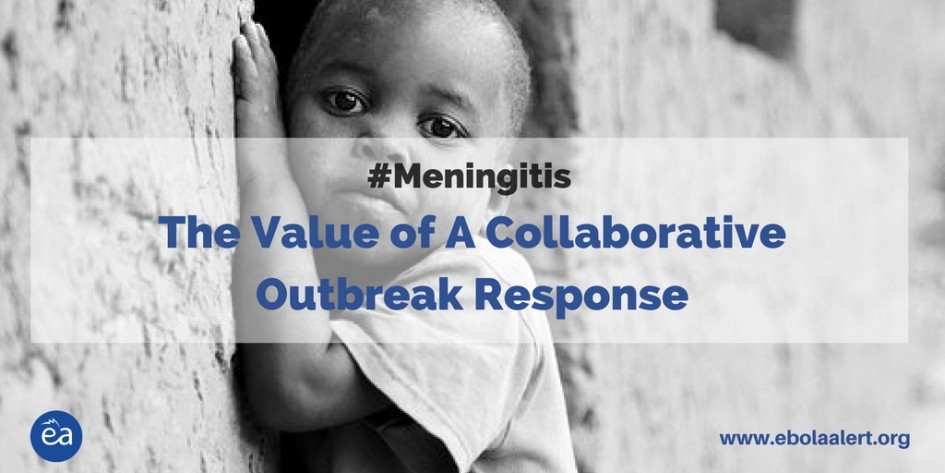 
Communicable diseases remain among the leading causes of death, illness, and disability in African communities. When disease surveillance information is available and supported by laboratory confirmation, these events can be detected and investigated in a timely manner, and support an effective public health response.

In 1998, the World Health Organization, Africa Regional Office (WHO/AFRO) instituted Integrated Disease Surveillance and Response (IDSR) @ebolaalert, a strategy for strengthening the availability and use of surveillance and laboratory data for detecting, reporting, investigating, confirming, and responding to well-known and largely preventable priority diseases as well as other public health events. The month of March was marked by reports on disease outbreaks and the collaborative responsive approach to contain the outbreaks.

The latter half of March had  on the news. This disease, which is largely prevalent during the dry season has been reported to be ravaging five states in the North-West region of Nigeria including- Zamfara, Sokoto, Kebbi, Katsina and Niger States. A total of 2524 cases have been suspected with 269 confirmed deaths. The CEO of the Nigerian Centre for Disease Control (NCDC) was live on air to disclose the collaborative efforts of the agency and other public health parastatals in tackling this diseases and other emerging diseases.

According to the information released on NCDC website, an Outbreak Control Team has been deployed to coordinate the response. This team includes representatives from the National Primary Healthcare Development Agency (NPHCDA), World Health Organisation (WHO), United Nations Children’s Fund (UNICEF), US Centers for Disease Control, Médecins Sans Frontières and EHealth Africa. The Outbreak Control Team is focusing on communicating prevention messages, strengthening surveillance, case detection, verification and management as well as communication and coordination across the affected States.

Also over the week, a multi-national collaboration for an  immunization exercise kicks start to prevent another polio outbreak.

Multidisciplinary meetings have been ongoing to strengthen #OneHealth and prevent new outbreaks of the H5N1 avian flu, following identified strains in poultry.

Introduction of #AvianInfluenza into countries is usually by migratory birds or smuggling of infected birds#NCDCJRM pic.twitter.com/MR7e2DDZy5

One of the most important determinants of the control of an outbreak is the strength of collaborative efforts. In the last five years, the face of health security has changed in Africa, with innovative responses and newly inaugurated multi-regional collaborations, most recently, the Africa Center for Disease Control, with headquarters at Addis Ababa.

There are questions we need to ask of ourselves: What are we doing differently? How can we be more responsive to Alert thresholds in neighbouring states? How can we make more efficient the vaccine delivery systems in place? How can funding for health security reach the affected populations across the Meningitis Belt?