Still She Fights On 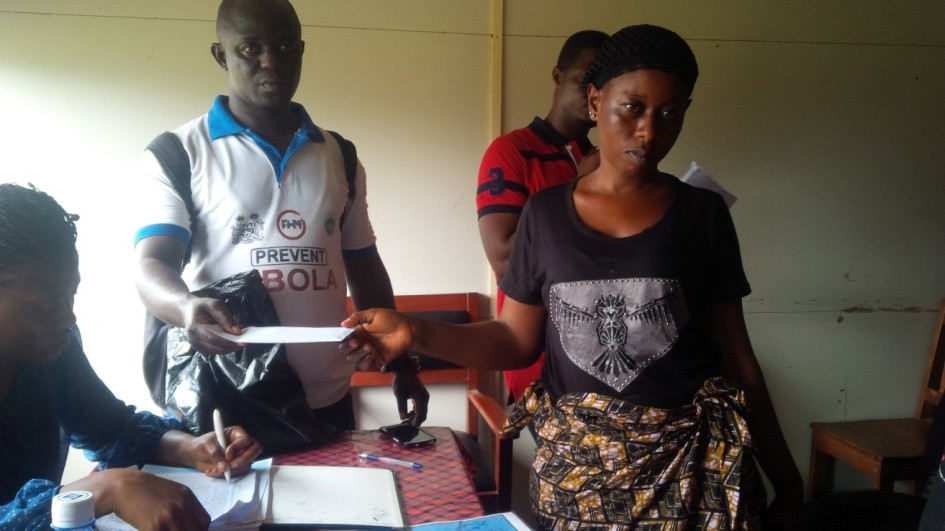 Eunice Jalloh receiving a startup cash of 250,000le from a local NGO


Eunice did not hide. She immediately called for immediate treatment and care.

Eunice Jalloh, a 29 year-old housewife contracted Ebola when she paid a friend a visit. She found her sick and vomiting. Not knowing her friend had Ebola, she helped clean her up without any form of protection and took her to the hospital. Within a few days, she had developed symptoms and despite taking analgesics, didn’t experience any improvement. She immediately asked her husband to call for an ambulance which then took her to the holding center.

Everyone in her family got infected – her husband, the husband’s second wife and children. Sadly, only she and one of her husband’s son survived; everyone else in her family perished. At the treatment center, she became very weak, couldn’t eat and found it very difficult to take her medication. Then she started vomiting and stooling. At that point, she lost hope of surviving.

“I didn’t even know I would survive the virus.” She said. “However, the health workers were very professional, friendly and supportive throughout my stay at the treatment center.”

After her discharge, Eunice received support in form of cash and materials from various local NGOs. She also decided volunteered for the Ebola Response and is currently (temporarily) employed at the Observation and Interim Care Center (OICC) – a place for children without caregivers, who are under a 21-day observation for Ebola disease.

She is yet to get over the trauma of losing her husband and other family members to the virus. She has also had to battle with stigmatization – her sisters and neighbors wanted nothing to do with her. Despite all these challenges, Eunice continues to have faith in a better tomorrow and assures herself that she has something to live for. We salute Eunice and other survivors out there who inspire the rest of us and make us realize that as long as there is life, there is hope.